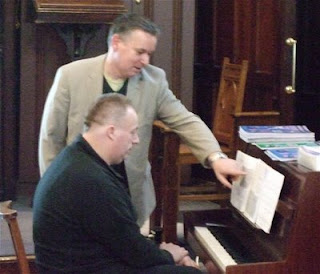 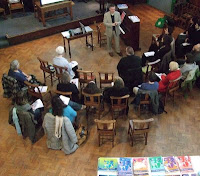 I'm typing this on the train from Leeds to London, having completed a mini-UK tour which took me from London to Liverpool, Cambridge, Shrewsbury and Altrincham. I was speaking to groups of music teachers, but also students (as young as 7) parents and even grandparents, as you will hear!
First up was a workshop in Camden, north London on 20th February. Hosted by Dot's Music (www.dotsonline.co.uk) this was an afternoon workshop and the relatively good turnout was partly because it was scheduled for the end of half-term. It was held in a lovely old church off Camden High Street (see picture above)
The teachers were very interested in American Popular Piano (www.americanpopularpiano.com) because Microjazz is now what you might call a "mature" product (I guess I am as well!) and this is the first major new series from Christopher Norton in years. The whole idea of a series using contemporary popular styles to teach students to read music, play well and enjoy listening to themselves struck a (ahem...) chord. But it was when I got teachers to come and improvise that interest really picked up. My "student" pictured above right was a teacher who said he was looking for something fresh for himself as well as for his students - teachers can get a bit jaded and a new angle can come as something of a relief!
One other participant said he was a sax player and teacher and was pleasantly surprised to find that my teaching methods were very similar to his - we'd both come to similar conclusions about what might be needed (and more importantly, what might work) independently.
Thanks to Dot, a french horn player -tuned-music dealer, whose enthusiasm for music and helping teachers seems undiminished.
Posted by Christopher Norton at 12:50 PM