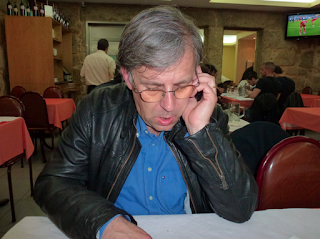 He has always loved the Microjazz series and the midi files that accompanied the books and promoted both very effectively for many years. He now teaches at Conservatories in both Porto and Vila Real and was very keen to get me to visit them, initially the Conservatory in Vila Real. This is no easy task in the present economic climate. As Victor put it:


It has not been easy for them, as the economic situation in Portugal - especially with what concerns educational policy - has been very, very severe. Schools are striving hard to get doors open, because the government simply cut the funds to the conservatoires and music academies.


After quite a bit of to-ing and fro-ing we got it together and I flew from London to Porto on a very late flight (air traffic controllers in Portugal decided to strike on the day I was travelling) So late that we arrived in Vila Real, by car from Porto, at 3.45 am!


By 9.30 the next day I was speaking to nearly 200 students. Most of them had never heard of Microjazz or me, so it was a chance to introduce them to the sound of Struttin’, Intercity Stomp etc. I got various students to come and play with me, which the audience loved. Here’s one of my Portuguese students, concentrating hard: 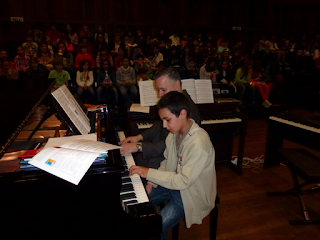 You can see it’s quite a large audience and also that the facilities were very good – a grand piano in a lovely concert hall, along with a Roland HPi-7 (which contains a Microjazz selection)


I introduced students to the Microjazz series, to Microstyles, the Concert Collections and Preludes and the new Micro series. They saw video clips of students playing pieces and were happy to take part with clapping and vocal percussion and singing. And quite a few students played for me, not just on piano: 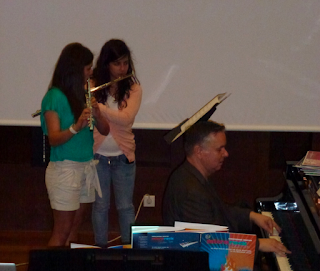 The Microjazz books for instruments with piano were described and in some cases illustrated with off-the-cuff performances, along with Concet Collection pieces for flute, clarinet etc.


I finished by doing a quick overview of American popular piano, going straight to improvisation, using the Preparatory book. This was of great interest to both students and teachers and before the end of the day I had done some work with teachers on improvisation. Here’s a teacher having a go at simple improv: 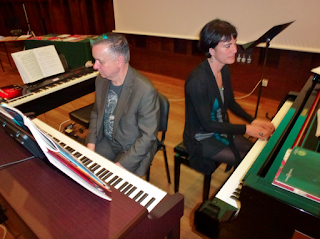 Vila Real is a delightful town and we were able to sample some of the excellent local food (especially little savoury pies – a return visit is definitely in order!) and wine on this brief visit.


Victor and the Conservatory are keen to put ona series of Christopher Norton Piano Festivals in northern Portugal, which would be wonderful. My thanks to the Conservatory for being prepared to have a foreign visitor in these straitened times. I hope to see you all again soon!

Posted by Christopher Norton at 4:33 PM No comments:

My very first Piano Festival was in Canada, in Fort McMurray, but Toronto has become an annual fixture on my calendar and this was the 5th Christopher Norton Toronto Piano Festival, organised by the indefatigable Liselotte Jongedijk.
Day One was in Richmond Hill and was hosted by Miss Linda’s Music Studio and sponsored by Cosmo Music, a large music dealer with amazing facilities, including a first-rate concert hall. 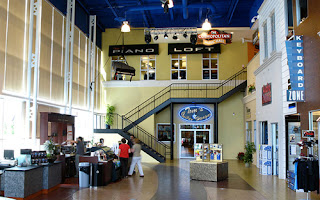 I began with an improv group, using one of the rooms at Cosmo Music that accommodate lots of keyboards. The children enjoyed playing together and also seemed to enjoy the chance to come up with their own ideas (as long as they could repeat them!) Here are some of the students hard at work: 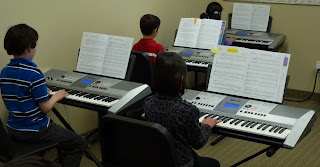 The day involved masterclasses as well as improv groups and both teachers and parents sat in on the sessions. The performers were well prepared and were also open to suggestions from me, especially if it made the piece easier to play! Here’s a master class student trying to concentrate while I demonstrate a point: 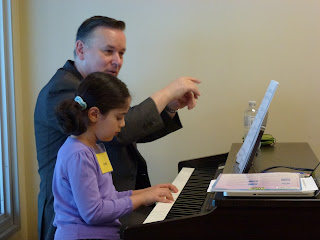 We moved to the concert hall later in the day and proceedings were rounded off by a Gala Concert, where students played for a very appreciative audience, with me busking along as required. 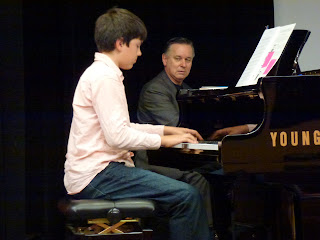 On Day 2 I went to The Toronto Montessori School, where a group of very well-prepared students took part in an afternoon masterclass. A number of the students also attended the main Piano Festival later the same day and were able to take part in another masterclass as well as an improv group. The piano teacher at the school, Lori Cotton, has used my material for many years and the performers were among the best I’ve heard in Canada. I hope to see them and their teacher again in 2013.
And so to the main event, the Toronto Piano Festival organized by Liselotte. Spread across 2 days and featuring over 50 students, this was a chance to work in some detail on improv with children as young as 7 and as old as 15. It was also a chance to make helpful adjustments to solo performances. We achieved some spectacular results and also had a lot of fun. Here are some pictures of students at work: 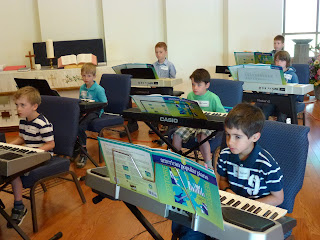 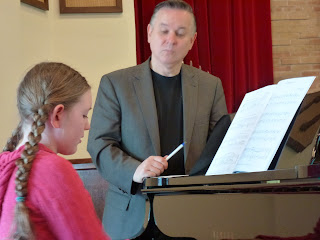 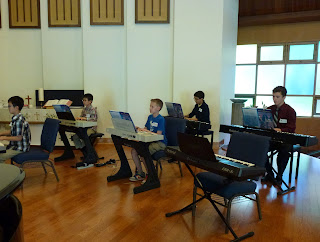 The Gala Concert was a wonderful end to the Festival – a large and very appreciative audience were treated to some breathtaking performances by solo performers as well as tight playing from the improv groups and some amazing improvisation from the older students. It really was a special occasion for everyone concerned. Roll on the next 5 years! 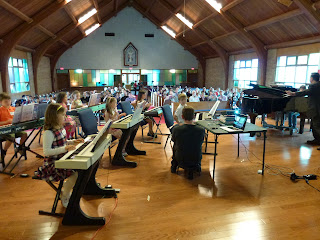 Posted by Christopher Norton at 12:40 PM No comments: