Back in 2006 John Perryn Primary School in East Acton was declared to be failing its pupils and faced closure if it didn’t pull its socks up.

The school received an £8.9 million investment from the Government and it is now nothing short of state-of-the-art. Facilities for the wider community were also built, including a 25-place children’s centre and adult learning rooms. Impressively strong consideration was given to the environment throughout the project, with the new school using renewable energy sources for heating and achieving a 53% reduction in carbon emissions. Since the pupils moved in April 2009, the school has been taken off special measures, and only one teacher left during the last summer holidays, compared with the four or five in previous years. The number of pupils has risen to 420 from 350 in April last year, and full capacity of 470 is likely to be reached next year. “We’re over the moon,” says head-teacher Von Smith. “We’ve already had people from Buckinghamshire and Essex councils in to see it. I say to them, if every school you build goes as well as this one did, you’ll be lucky.” 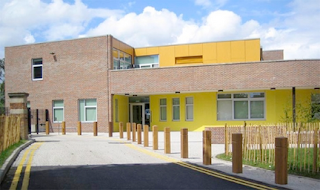 A cellist I have worked with over many years, Robin Thompson Clarke, has recently started a job at John Perryn Primary School and he asked me to come in for a half day and do some composition-related activities with a group of around 60 students.

I started by playing the students some pieces (Struttin’ from Microjazz Collection 1 and In the Bag from Microstyles were particularly well received) and got them to keep a beat with each piece, initially one student at a time. We then went onto exploring off-beats, on 2 and 4, but also on 3 and on 4. Finally we began to add rhythms to the beat (and off-beat) to create little purely rhythmic pieces. I got a group of 6 students up and they played simple percussion rhythms while Robin played Desert Air from Big Beats Smooth Grooves with a backing track. One student correctly guessed that the piece was about the desert. The students enjoyed this interactive session and seemed to grasp the concepts very well – the idea of a steady beat, off-beats, rhythms that repeat and rhythms that are an “answer” to a “question”.

CN and students listen to one of the performance

Posted by Christopher Norton at 11:18 PM No comments:

At an altitude of 1500m above sea level, St. Veit is apparently Austria´s highest health resort!  It’s in a sunny hillside setting (in summer) and has fantastic views of the surrounding valley.  I flew to Vienna from London, then drove south for over 3 hours to get to St Veit, by which time it was dark, so the charm of the town centre was what I was aware of rather more than the actual setting of the town. Like this: 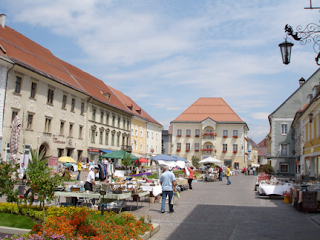 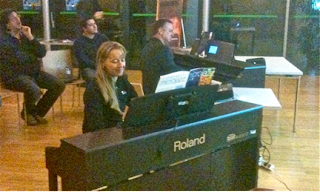 It was clear that the combination of the Microjazz series, with its pieces that appeal to students and its strong pedagogical elements, and the interactive software built into the Roland HPi series pianos, has great potential. Students will be more inclined to practice, play and record things at home and of course they are building a knowledge base of contemporary popular styles quite effortlessly.

Posted by Christopher Norton at 11:25 PM No comments: