New Zealand - Home of My Youth

I was invited to New Zealand to take part in a first performance of the Octagon Overture, a new orchestral piece written for the 40th anniversary of the Dunedin Saturday morning orchestral scheme. I played in the scheme right at the beginning, so it was wonderful to see how much it has contributed to the musical life of Dunedin and also to meet up with people I’d not seen for decades!
When I first arrived in New Zealand, I gave a talk about my life as a composer to students on the composition course at Canterbury University in Christchurch. It was challenging for them to hear someone talk who really has made a living from being a composer (admittedly for the educational market!) Universities are naturally trying to encourage students to write experimental music, certainly pieces longer and mo
re complex than Microjazz or American Popular Piano pieces! The perceived wisdom is that making a living from writing is secondary to trying to find your own voice through a mixture of experimentation and analysis of contemporary pieces. My breezily coming in and saying that having real enthusiasms for certain composers or styles could be a good starting point for one’s own writing met with a certain bafflement. But there was good dialogue with the audience and students came up and played with me, so some positive connections were made with these musicians of the future. Thanks to Roger Buckton for arranging this event. 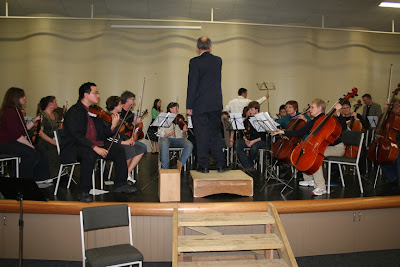 On to Dunedin, the city where I went to school and where I also went to university. I was delighted to give a similar talk at the music department at Otago University, to a mixture of students and lecturers, in the very same hall (Marama Hall) where I attended lectures from 1970. This was a very different audience – there is a rock music course on offer and Otago University’s music department has paid more than lip-service to the legitimacy of popular music, especially since John Drummond became professor. Dunedin has had a thriving pop music scene since the 80s and there are very successful composers for film living in the city. So my presentation was of great interest and I had lots of questions and comments from the audience during it. A student composer, Jaroslav Novak, came up and played a very effective Toccatina he had written as a 16-year old and the fact that it was an unashamedly tonal and accessible piece was regarded by the audience as a plus rather than a source of embarrasment or worry. The composer’s delight in feeling he had started from where he felt comfortable stylistically was palpable. I talked about the different strands of my writing from the Trio (see Youtube) and Four Three to Microjazz and Connections, including arranging work, recordings and ringtones and was also able to present American Popular Piano as a perfectly valid coming together of all the strands of the last 30 years. My thanks to Peter Adams for organising this event.
The same day I did a presentation to 150+ students from Dunedin schools – this involved a lot more audience participation, with willing victims coming to the stage to help me illustrate various points. My performances of various pieces (particularly Preludes and pieces from The Concert Collections) were alternated with student performances of pieces for various instruments with piano. The audience thoroughly enjoyed the whole event and were pleased to give vocal support to both the students and my efforts to entertain and on occasion amuse. This event was at Otago Boys’ High School (my old school) and was written up in the Otago Daily Times and the newsletter of the school:
http://www.obhsfoundation.co.nz/news_and_events/newsletters/October2008.cfm
The weekend of the 20th and 21st August was largely taken up with preparations for the 40th anniversary concert, along with awards and speeches. The founder of the scheme, Roger Buckton, was an engaging and genial presence and the conductor of my new piece was Aart Brusse, one of Roger’s protégés from 1968. During the celebrations, 2 Microjazz pieces were played expertly by a young clarinettist with piano and an even younger piano player. The Octagon Overture was rehearsed and seemed to go down very well with the players. On the Sunday afternoon there was a grand Town Hall concert, with items from massed instruments, choirs, recorder groups, swing band etc. The Overture was the climax of proceedings and its bright and tuneful demeanour seemed to hit the spot with the audience crowding out the Dunedin Town Hall. Again the whole event was covered extensively by the local newspaper.
Before I left Dunedin, I gave a talk using Microjazz and Microstyles pieces to an entire local primary school, who sang for me and took part in rhythm and singing games with great gusto.
Back to Christchurch, where I gave a presentation to the local music teachers association, this time on APP. This was a large group and was a wonderful event, at least for me! The audience was attentive and also reacted in a lively fashion to everything that they saw and heard. Many performers came and played and I felt the whole message of the series – that even average students can progress well and learn to both play and improvise from the start – came across very clearly. There was a lot of interest in staging a Christopher Norton Piano festival next year. Watch this space! Thanks to Margaret Maw for organising this event.
I also did a presentation for View Hill Primary School near Oxford, out in the country north of Christchurch and once again was amazed at how young children react with great enthusiasm to music they can relate to and take part in.
A very eventful and rewarding 2 weeks!
Posted by Christopher Norton at 1:02 PM No comments: 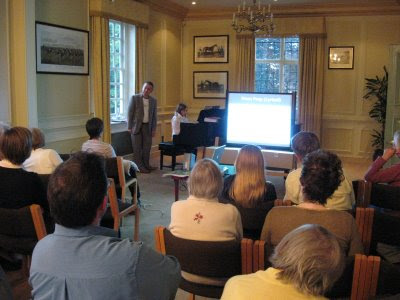 Ackerman Music has 3 stores, one in Hove, one in Crawley and a store in Chichester that organized this American Popular Piano workshop (thanks Lynne!) Formerly known as Bern’s Music, the store was established 22 years ago and sells an impressively extensive range of music. There was a good-sized group of teachers (and some students) at this evening presentation.
Pretty much all of the people at the Ackerman Music workshop were familiar with Microjazz and indeed some of the teachers had copies bought over two decades ago (with the “early” photo of me on the back – ulp!) They had obviously found the series useful over the years and so were very open-minded about a new series from the same writer. What they didn’t expect was the course of study aspect combined with an emphasis on improvisation from the very beginning – this proved to be a real plus. Quite a few teachers came up to play and everyone found the presentation informative and entertaining.
Excellent food and drink was on offer at the end and people stayed to chat (and look at the books) – always a good sign!
Thanks again to Lynne and Ackerman Music for their enthusiasm and to all of the teachers for coming out to an evening workshop.
Posted by Christopher Norton at 9:06 AM No comments: