The Frankfurt Messe is an annual international fair for musical instruments, sheet music and music business connections. I was there representing Boosey & Hawkes, Novus Via and my new digital ventures, www.christophernortonmidi.com and www.fourhandsplus.com. I was stationed at the big, very impressive Schott Music stand. Here's "my" part of it" 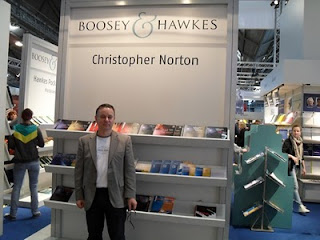 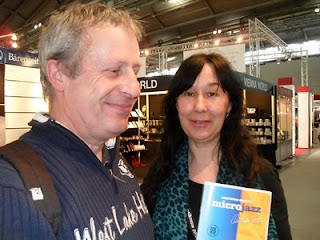 Apart from talking to teachers I was also asked to play for a reception that was celebrating the 250th anniversary of Schott Music. A special treble clef-shaped pretzel was baked for the occasion: 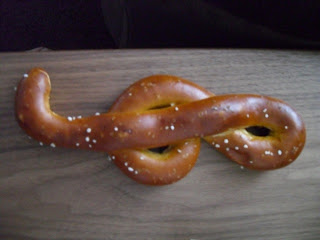 And here's me at the piano, using a Roland HPi6, which contains 50 Microjazz pieces as part of its software. I look suitably rapt, although it could be the effect of jet-lag (New Mexico to London to Frankfurt) 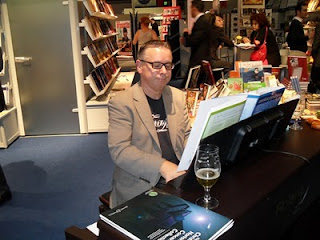 Two colleagues were with me at Frankfurt, Clarke MacIntosh from Novus Via and Lydia Machell from Prima Vista. Her company has made all of American Popular Piano available in Braille - an exciting new development! Here they are at the fair: 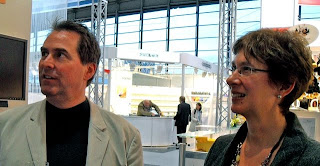 Posted by Christopher Norton at 12:34 PM No comments:

The MTNA - Music Teachers' National Association (http://www.mtna.org) was founded in 1876 by Theodore Presser in Delaware, Ohio. Its aim then, as now, was to advance the value of music study and music making to society and to support the professionalism of music teachers.
The 2010 MTNA was in Albuquerque, New Mexico. Numbers were down from last year - the economic downturn being the major factor - but it was a very worthwhile convention for me and my colleagues from Novus Via Music (www.nvmusicgroup.com)
I first attended MTNA in Portland in1987, where I launched Microjazz on an unsuspecting American public. And in 2007 in Toronto I launched both Connections and American Popular Piano. This year Scott McBride Smith and I gave a presentation grandly entitled Effective Practice(s) to Direct Success, which outlined why we think American Popular Piano is an excellent way to encourage good practice habits from an early stage.
Lots of seminars go on throughout MTNA, as well as concerts, masterclasses and competitions. There is also an extensive trade area, where I was to be found much of the time. Here's a picture of the Novus Via stand. Can you spot me? 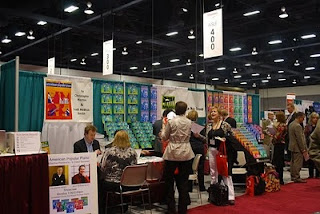 I was gratified by lots of comments from teachers about how they are finding American Popular Piano - many teachers have started to incorporate the series into their teaching and have been delighted with pupil reactions. One teacher from Oregon gave a glowing testimonial during our presentation - with all the right terms: pupil-saver, great for boys, encourages students to practice...
One of our earliest adopters, Jon Michael Iverson was at the convention and played some ensemble pieces with me. Here he is at the piano on our stand: 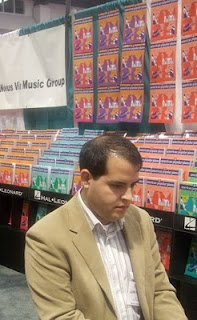 That's a look of rapt concentration isn't it! Jon's website includes The Christopher Norton Project, where you can see great student performances of Connections and American Popular Piano pieces.
MTNA was a great chance to see colleagues from all over North America and beyond - from Clavier Companion (I write a column for them) Schott Music, Hal Leonard, MYC and EPTA. I was also delighted to attend a reception for Ingrid Clarfield - a documentary is being made about her recovery and continuing work as a teacher after suffering a debilitating stroke 2 years ago. One of her students was almost overcome when she realised who I was (and yes, she is from Canada..)
MTNA was a very happy time and I am beginning to feel optimistic about American Popular Piano making its way in the world. Next year Milwaukee!
Posted by Christopher Norton at 5:17 PM No comments: