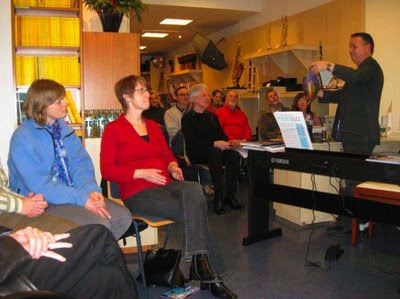 Last week I did a workshop in Kaiserslautern, which is in the Rhineland in central Germany. It proved quite an adventure - an early flight from London City Airport to Frankfurt was great but all passengers who had luggage in the hold found that it was all lost on arrival! I still haven't got it back - camera, speakers, projector, a complete set of books.
I hired a car at Frankfurt and drove to Kaiserslautern, a charming city which has a large Nato military presence, a well-known university  and a number of international research institutes. Fortunately I had my laptop with me, so we managed to find equipment that did the job, including a projector and screen and a little speaker for backing tracks. Phew!
The shop had done a good job of publicising the event, which was actually in the shop (www.musik-schaller.de) and we had quite a good crowd. One of the people there was English but had lived in Kaiserslautern for over 40 years, so I had an excellent translator! It was an introduction to Microjazz (and Microstyles, The Easiest Way to Improvise, the Concert Collections and Preludes) and of course I found quite a few people who had never heard of me or my compositions! I quite like the feeling of having to start the process of creating market awareness which began 25 years ago and which never really ends. I got the audience to clap and even to sing - we will post some video footage of this soon!
The second part was about the Latin elements in Microjazz, although I also made quite a feature of MicroLatin, which is so new I haven't really ever publicised it. Again, there were lots of things to do for the audience, including some of the clapping exercises found in the forthcoming Guide to Microjazz, written in conjunction with Scott McBride Smith (www.iiym.com)
I had hired a car and one of the many things lost in my luggage was my own GPS unit - the one supplied in the hire car simply would not find Frankfurt airport, so I had to drive right into Frankfurt and hope I found airport signs! Fortunately I did and got a flight back to the UK late that evening.
The shop in Kaiserslautern have written a report (in German) on the workshop which will be posted on the my Boosey & Hawkes website (www.christophernorton.com) They hope to have an American Popular Piano workshop next year.
Posted by Christopher Norton at 12:15 PM 1 comment: