I was part of the bi-annual Musiquest in Pune in 2011, an event masterminded by the wonderfully named Roxana Anklesaria-Doctor.

Roxana, originally from Pune, studied, lived and taught in Vancouver for a number of years, but finally returned to her home city and has since built up a large and impressive music studio there – the Academy of Music. Students come to her from various parts of India and her Musiquest (www.academyofmusicpune.com) events have proved to be a wonderful addition to Indian musical life. I had a great time on the last one in 2011 (look for the report on this site) and Roxana and I decided to strike out and have a separate Christopher Norton Piano Festival in Pune early in 2013.

67 students enrolled, mostly from Pune, but also from Mumbai, Hyderabad, Bangalore and even Assam (more of that later)

The first full day was private lessons – one local teacher had prepared 9 of his students for this. The students had all been very well prepared and as a result they got a lot out of these one-hour lessons. Here’s one of these “one-to-one” students: 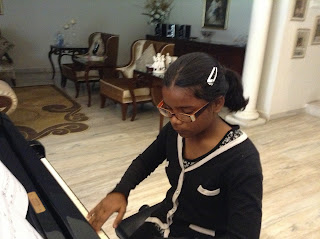 Day 2 had the more usual Piano Festival Pattern. It looked like this:

Every group had learned 2 pieces from American Popular Piano (I had provided the names of the pieces) and Module 1 of the accompanying Improv Etude. They were all well enough prepared to get a lot out of the sessions and every student improvised quite fluently in the time. Here’s one of the groups playing as an ensemble: 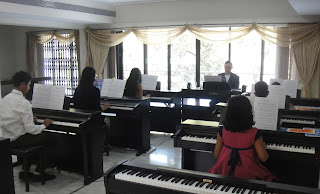 After their group improv session, everyone went downstairs to the magnificent concert hall at the Music Academy and I took a masterclass. Every student had prepared one of my pieces and everyone was very well prepared. We talked about piano technique as well as musical matters and I wrote a brief note to each student about their performance. Look at how happy the students in this group looked after both the improv group and master class: 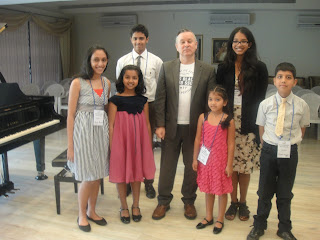 I did 3 days of improv groups and masterclasses, covering Prep (my youngest student was 4!) right through to Level 8.

On two of the evenings I gave talks to the students and teachers (and some brave parents) on improvisation, on vertical harmony and on pop styles in general. These sessions made liberal use of audience members and were great fun.

On the final evening, all of the improv groups played an ensemble piece (and did some improvisation) and I also featured the most secure players as soloists. As I often do, I accompanied on a second piano. Here’s a concert picture, showing some of the 10 keyboards we used (in addition to 2 grand pianos) as well as me and a 6 year old improviser: 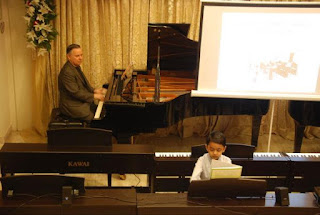 And here are all the participants in the Pune Christopher Norton Piano Festival: 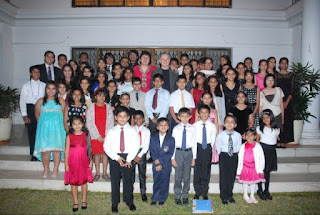 This was a very happy event and we hope to do another in November 2013, either before or after Musiquest. And other Indian cities beckon as well…

One other highlight for me was the presence of Ron Cha, a student from Assam who was at Musiquest and is turning into not just a very expressive pianist but also a first-rate improviser. He acted as my assistant at all the sessions and played a supeb piece of his own to finish the concert. 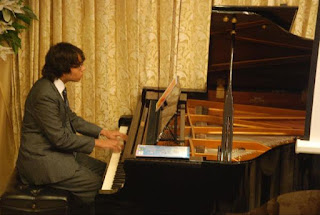