NCKP (http://www.francesclarkcenter.org) stands for the National Conference of Keyboard Pedagogy. It’s a bi-annual conference that brings together academics, private music teachers and music industry professionals from across the US and Canada. The 2009 delegate list reads like a virtual “Who’s Who” of keyboard music education in America. I was at NCKP representing Novus Via Music and I both co-presented a session on American Popular Piano (www.americanpopularpiano.com) and also worked in the conference exhibit hall with many of the delegates, showing them the music but also guiding their first steps at improvising. 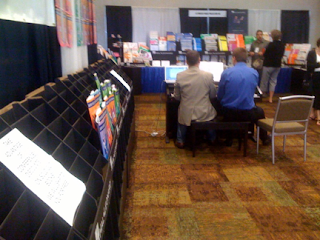 The strong interest in evidence at NCKP is partly because Scott McBride Smith and I have been doing lots of promotional work around North America (see previous blogs) But I also felt that North American music teachers are ready for something fresh and are also as a group starting to pay more than lip-service to improvising as a component of their teaching programmes. I worked with quite a number of teachers on how the APP approach to improvisation works and they were all very keen to take the books home and try them out right away. Here I am with a very happy Amy Immerman (from Ohio) 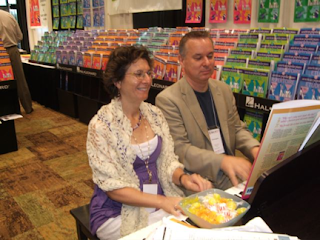 The stand at the exhibit was a hive of activity much of the time – here’s a picture of Scott McBride Smith (he’s the tall one!) deep in conversation with a teacher while other people peruse the (diminishing) stocks. 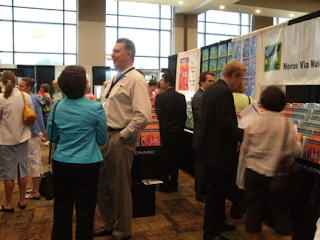 Shortly after this photo was taken, Scott flew off to Oregon to present American Popular Piano at the Oregon Music Teachers Association. Here is a testimonial from one of the teachers in Oregon:
"I am a classically trained jazz/improv pianist—a high level professional plus fully certified and licensed as a Music Specialist in Oregon K-12 with Masters Degree in Music Education & piano. I think American Popular Piano is the finest series I have ever seen for the students we have today taking piano for enjoyment, not competitions. I am so sold—I literally RAN to the OMTA vendor booth and bought the first set at this weekend’s OMTA conference and am already filling out order requests for a bunch more."
Jon Michael Iverson was also at NCKP and played ensemble pieces with me. Some of the videos he has created with his students were a great hit during the showcase. You can hear (and see) more of them at www.jonmichaeliverson.com. Look for The Christopher Norton Project…. 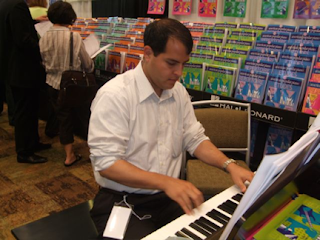 We were very fortunate to have Richard and Isaac Holbrook (www.holbrookpiano.com) assisting us – they are former pupils of Scott McBride Smith and Carolyn Shaak who have both gone on to make careers in music, including helping to run a prestigous summer music camp for gifted students from around the world – iiym (www.iiym.com) Here is Isaac with Rosa, a teacher who helped me during the showcase by acting as my student and being instructed on improvisation from APP Etudes Level 1, on stage. A brave girl! 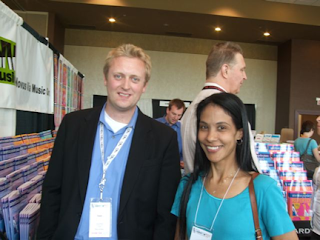 NCKP was a wonderful chance to meet colleagues, see my growing number of American teacher friends (including the organiser of my recent Boston workshop, Kathy Maskell) and feel a dramatic surge of interest in American Popular Piano. This could be the beginning of something big! There were also a number of enquiries about visits to teacher groups and music schools which may well create a whole programme of North American events in 2010.

Posted by Christopher Norton at 3:37 PM No comments: