The Frankfurt Book Fair is an annual fixture on the calendar of book publishers and authors from all over the world – significant deals are done and major new releases promoted. I have been to the Frankfurt Music Fair many times, but this was my first visit to the Book Fair. Schott had taken a stand and I was invited to launch Rock & Pop Piano Basics, a new book on playing pop piano styles which is initially a German-only publication. 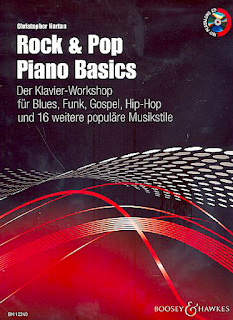 On day 1, I gave a presentation on this book,  on the stand, which had been set up nicely with a grand piano and a great little sound system. No, I didn’t actually present in German (I hope that will come!), but the music styles and the look of the book attracted a good number of people to stop and listen. Here I am in full flight: 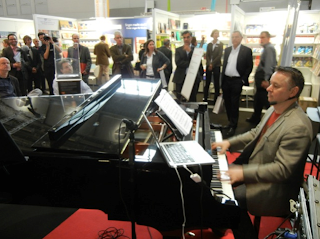 The pop book looks like it could be very popular and will soon be available in French and English. My able assistant in Frankfurt, Cornelia Angelov, has already been playing from the book at home and has found it both accessible and effective for a relative non-pop piano player.
Later that day, I played, still on the stand, a selection from right across the Microjazz series. This was to encourage passing traffic to stop and created a nice backdrop to the quiet hum of the fair. Here I am at the piano, in what looks like some kind of reverie: 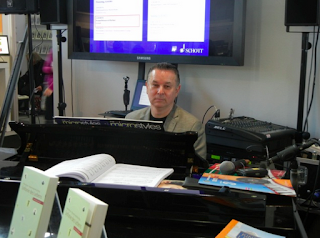 The following day I played at the beginning and end (and in the middle) of a panel discussion about the effect of music on intelligence. The audience found it engaging (the panel discussion I mean) and the musical interludes were well received, particularly a pop ballad from Rock & Pop Piano Basics.
This was a low-key event, but I think worthwhile for further raising my profile in Germany and also for drawing people’s attention to one of my largest (160 pages) new books. Thanks to Schott Mainz for asking me to do this and for being, as always, such gracious hosts.
Posted by Christopher Norton at 4:53 PM No comments:

Aveiro is a charming city on the coast of central Portugal. It is sometimes referred to as the Portuguese Venice because of its network of canals and its history of trying to combat the forces of nature (ie water) over the centuries.
I came at the invitation of Nancy Lee Harper, an ex-pat American who has lived in Portugal for nearly 20 years and does a great job as a music professor at the university in Aveiro. Nancy is impressively active as a writer (she has recently written a very well-received biography of Manuel de Falla and also wrote a glowing review of American Popular piano for the EPTA journal) and is also a very accomplished pianist. See www.nancyleeharper.com for more details about her work. Here’s a picture of Nancy: 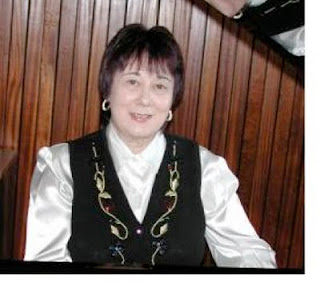 The audience for my presentation included teachers at the university, visiting piano teachers (some had travelled quite a distance to be there) and many students ie teachers-to-be. It was a young and very friendly crowd. Some of them knew about the Microjazz series, but I would say that most were new to my work. I played some pieces first to let them hear the range of styles and the level of difficulty. I then talked briefly about how my background – classical piano studies and a classical music degree followed by high school music teaching – led inevitably to the creation of Microjazz. I then played some Microjazz pieces and also showed a recent Youtube clip of a Chinese student playing one of the same pieces. I then, with some help from various audience members, played pieces from the range of publications on offer from Boosey & Hawkes – Microstyles, Concert Collections, Preludes and the new “Micro” series. And of course some of the new Christmas pieces. Here are some of the ever-attentive audience: 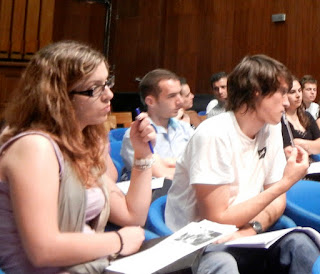 I was pleased to see one audience member holding up all of the Microjazz Duet Collections – she and I played Rio from Microjazz Concert Collection together . I also played a Youtube clip of a piece for 6 hands, Free’n’easy (from Microjazz Trios) done in a hugely entertaining way by three Italian pianists. See for yourself at http://www.youtube.com/watch?v=gKhmVO4F5m8
We had a good selection of books for people to look at and during the break. The music table was absolutely besieged by audience members.
The second part was devoted to American Popular Piano and the teaching of improvisation. I used quite a few audience members as “students” and this proved, as always, to be very effective. Using pieces from Levels 1, 2 and 6, from the series, I got students initially doing very simple things (with some help from the audience) and gradually got them to lose their inhibitions and come up with more sophisticated and stylish ideas, with their own “voices” emerging quite quickly. Here I am watching one of my new students playing: 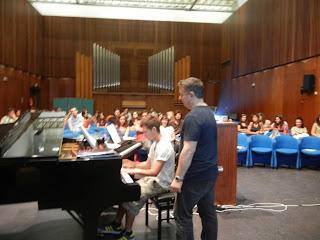 Again, reaction to American Popular Piano and its methodology was excellent and I feel that this will be the beginning of its widespread use in Portugal. I hope to return before too long and there are plans to take in some other Portuguese cities as well. Watch this space!
Posted by Christopher Norton at 4:26 PM No comments: