My last tour of Australia included a presentation at Masson Music in Brisbane (www.massonmusic.com) and this was the venue for the second Christopher Norton Piano Festival. 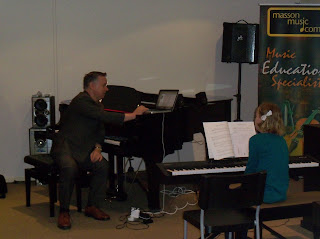 This Festival was a one-day event - this meant students from more than one Level working together for both improvisation groups and master-classes. This sounds like an awkward idea, but in fact it worked surprisingly well to have some students work on a Level 1 piece while Level 2 students watched and listened (and then the other way round...)

There were around 25 students spread across the day, so it was easy to give each student individual attention, especially during the improv group work. Every student played their 2 "improv" pieces with the rest of the group from their Level, with backing track, and every student also got to play both set rhythms and their own completely new ideas. 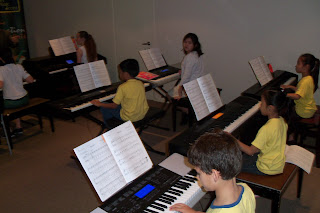 As the picture indicates, one teacher had her students smartly kitted out in yellow tops and by some strange co-incidence everyone else wore white tops, so a bit of friendly team rivalry developed! Fierce concentration was in evidence from some of the very young players, especially during their master-class: 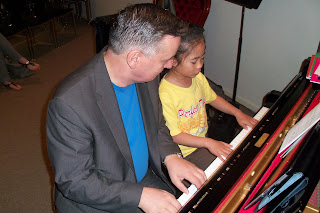 There was a very impressive age-range in evidence – from as young as 7 to late teenage and we heard a number of very spirited and accurate performances during a very intense day. It was great to see quite a number of Level 8 students doing demanding pieces and Improv Etudes, as well as performing Latin and Rock Preludes to a very high standard. 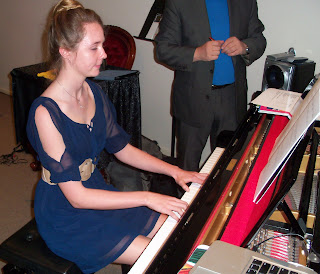 The whole day was held upstairs at Masson Music, who were able to provide a very impressive array of keyboards for the event. And at the end of the afternoon the room was opened out and we gave a concert to an enthusiastic audience of parents and teachers. The Gala Concert featured confident solos, tight ensemble pieces and a demonstration of some of the improvisation ideas worked on during the day.

Posted by Christopher Norton at 8:33 PM