During my tour of Australia last January I promoted the Piano Festivals concept and as a result I returned in late September for my first Piano festivals tour of Australia. The organiser for the inaugural event, a 2-day Festival in Adelaide, was Lesley Beale, a local music teacher who has over 70 students! She was a calm, unflappable presence and everything about the event was well thought out. 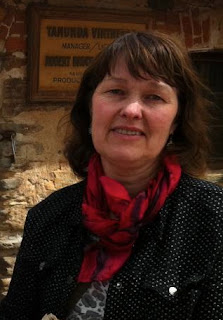 Both days had the same pattern – I first worked with 12 students (all at the same Level) on improvisation for an hour, using 2 American Popular Piano pieces. I made sure that every student had a chance to create something distinctive to them and a chance to feel good about their own ideas. The students also enjoyed working in a keyboard “orchestra” and ended up playing and listening much better both as individuals and as a group. 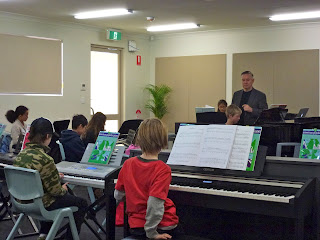 After a short break, we then went to a master-class, where the same students got to play a prepared piece on a grand piano kindly lent by a local piano dealer. Sometimes with the rest of the group played along on their keyboards if a particular point needed emphasising in a practical way. I was at pains to be positive and affirming of the students’ efforts and we all saw some real progress in technical and musical terms. 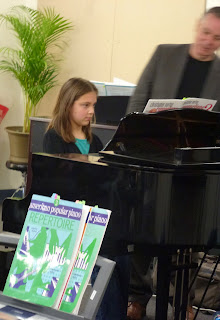 Then the whole process started again with another group of students at a different Level. We had students at Preparatory Level, Levels 1-4 and Level 6.

During the master-classes, I made a quick note of performers who felt “secure” musically and technically, with a view to them being included in the concert at the end of day 2. There were quite a few duets on offer as well as lots of solos. Many students, particularly the younger ones (the youngest student was 5 years old) had chosen American Popular Piano pieces that had a teacher accompaniment, which I played. 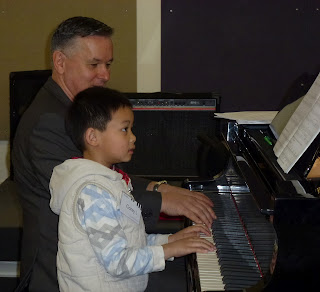 By the end of day 2, we had a list of performers for the concert. We also invited every improv group to be part of the concert, playing an ensemble piece as an item, but also doing some improvisation on stage. 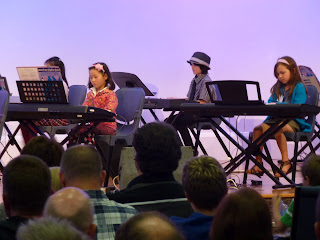 The large and enthusiastic audience was treated to a display of musicianship and piano playing that encompassed all of the Festival participants. A great time was had by all, even the performers! 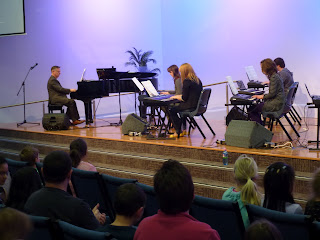 Posted by Christopher Norton at 1:28 AM