The annual MTAC (Music Teachers Association of California) Convention is the largest convention for private music teachers in California. This year it was held in Oakland, a city I will always associate with Tower of Power, www.towerofpower.com, specifically their Back to Oakland album. But I flew in some days earlier than the conference so that I could do a 3-day improvisation camp with students from two private studios in the Bay Area.

Ellen Tryba Chen is a private teacher in Saratoga who was bold enough to invite me to her studio 2 years ago (see the blog in the archives!) to work with some of her students on improvisation, using American Popular Piano. Here she is : 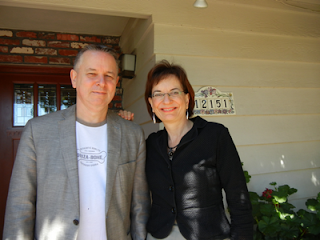 The event went very well, so Ellen decided to do a bigger event this year, with students from her studio as well as students from the studio of another first-rate Californian teacher, Kathleen Goldbach.

We had 20 students, playing American Popular Piano pieces from Levels 1,2,4 and 5. Each group came together twice. The participants all really enjoyed playing together as an ensemble, using 2 grand pianos. 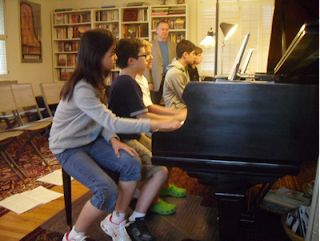 Each player was then able, through a steady accumulation of improv skills, to “find” their own voice and start to improvise in 2 contrasting styles. You should be able to tell how much fun the students of all ages were having from this photo: 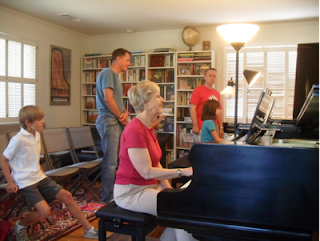 At the end of the improvisation sessions, all of the students put on a public concert. This was held in the beautiful Sherman Clay Steinway showroom in Santa Clara, using 2 magnificent Steinway grand pianos, one signed by Lang Lang! With extended backing tracks creating a rich, full sound, the students all played very impressively in ensembles as well as each individual improvising at least twice. Chrissy Huang, who organizes concerts in this venue, was positively overwhelmed by the concert, describing as “the most joyful concert” she has ever seen there. She immediately set about organizing a much bigger event, a Christopher Norton Piano Festival that will include both improv and masterclasses as well as concerts, in 2012 - watch this space!

Posted by Christopher Norton at 3:13 AM