The Frankfurt Music Fair is the big European event for music retailers and I have attended it for at least 20 years now! As always, I stayed at the delightfully named Hotel Hammer in Mainz. The picturesque Mainz railway station is across the road from the hotel: 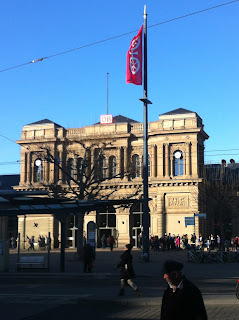 I was at the Messe for the 2 public days, so was able to talk to customers as well as to dealers. One highlight was meeting a flute player who met me at the Messe last year and had bought the Concert Collection for Flute. She liked it very much and was interested to hear that the Sonatina for Flute and Piano as well as the 2 Microjazz Flute Collections were now available to listen to on Soundcloud (as well as being for sale from www.boosey.com) http://soundcloud.com/nortonchristopher/sets/sonatina-for-flute-and-piano/
Here she is with the composer: 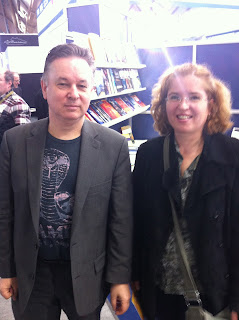 The head of publishing at Boosey & Hawkes, James Eggleston, was at the Messe and while we were there we were able to do quite a few useful things. One was to meet with Sarah Holcroft, the person at Faber Music who is overseeing the building of my new website (www.christophernorton.com) Another was to talk to a dealer who wants to do editions of Microjazz for Absolute Beginners and Microjazz for Beginners in Italian and Spanish. Here’s James with the Italian dealer (James is on the right): 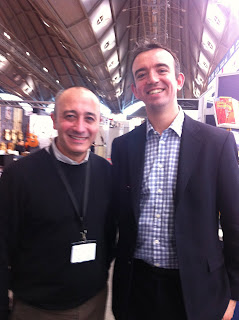 I showed James scores and music of some of the pieces from my new Micro Musicals. These will be the first featured new products on my new-look website (which should be ready by August) I’ve written 5 Micro Musicals so far and they are suitable for children in years 3 to 6. Piano scores, backing tracks (including “teaching” tracks) dialogue and suggestions for staging will all be part of a series of useful packs. And each Micro Musical can be taught in one day and lasts no longer than 20 minutes!

Workshops in Belgium, Germany, Italy, Spain and Sweden were all discussed with dealers – more details will follow.

This was a low-key event – numbers at large Music Fairs are diminishing – but was worthwhile for strengthening links with European dealers and for getting the chance to speak direct to customers. And of course it was great to see colleagues from Schott and Hal Leonard US as well.

I love the way you have embraced technology with your video links, pod casts, U Tube and the like to connect with everyone and keep the journey of music exciting!

I am sure the NEW 20 MINUTE MICRO MUSICALS will be a hit for students and teachers alike!
PERFECT TIMING!

Hi Heather! Looking forward to seeing you all later in the year. Pretty much all of APP is now on the ANZCA syllabus. I'm combing through the midi files at the moment just checking they're all correct in terms of split piano on tracks 3 and 4 etc. I'll send you the end result. C