I’ve worked for many years with a superb cellist, Robin Thompson-Clarke. 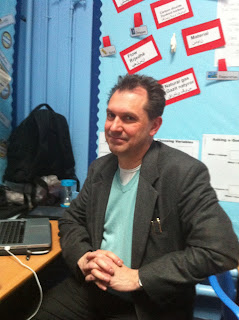 In Robin's own words:

I first met Chris while working as a professional cellist, when I was asked to play on John Pantry's album "Simple Sailing for Beginners'”. As luck would have it, there were a couple of solo cello parts and Chris was very complimentary about my playing. He offered me the opportunity to work with him over the following years, playing cello on at least 40 albums, including 4 solo ones of my own. During this time I fixed musicians for Chris for many albums and as well as working with Chris. I have also acted and continue to act as his “agent” from time to time.
While working together we became friends and have remained so ever since. I gave the first UK performance of his Sonatina for cello and piano and Chris and I are going to record it in the near future. As well as continuing to work as a professional cellist, including teaching at the Royal College of Music, I am also a fully qualified primary school teacher, working in an East London, school as part of the senior leadership team and as their Advanced Skills Teacher for Music. 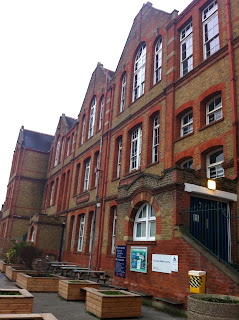 Robin’s recent career as a primary school teacher has created opportunities for me to go into schools he is working in and work with his students, either getting them to compose their own music or perform pieces for me, some composed by me, others pieces I’d found that I thought they would enjoy. But the idea he had for Davies Lane Primary School in Leytonstone was a radically new one – I would come in and work with 2 entire year groups for a day each and write two “instant musicals”, one based on Dicken’s A Christmas Carol, the other based on the Beowulf saga!

I sketched out each musical – words and music – the night before and then revised and added to each of them, each consisting of 8 songs, before teaching them to the groups (each of around 65 children aged between 8 and 10) by ear.  I had a piano, Robin was there with his cello and we also had a visiting teaching assistant who played guitar. 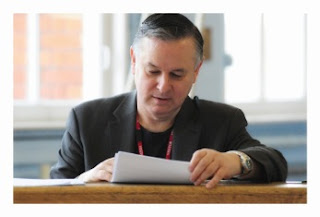 Apart from that, there were 7 hand drums and a bass drum as well as a small marimba and a glockenspiel. I auditioned students on the fly and ended up with a good group of players in each group, who both copied what I showed them and devised their own parts. I conducted the whole thing: 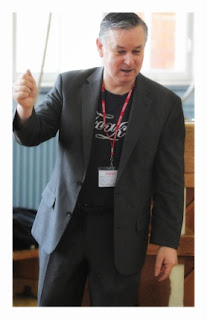 The 'Musical from Scratch' workshop with Chris was a fantastic success. Chris worked alongside the teachers from a whole year group of 65 children, to create musicals based on Charles Dickens's ' A Christmas Carol', and on the saga of Beowulf, both of which the children had been studying. From the very start, all of the children were engaged, even eager to contribute to the lyrics of each song! Children who were normally reticent about singing were completely involved. As the day progressed, Chris developed the ideas, adding instruments, body percussion and even whiteboards played with pens to accompany the songs. Solo singing and small groups were also added. Chris's music, original and contemporary, brought a sense of the 'West End' to this East London school; an experience few had or would ever participate in. Would I recommend you invite Chris to your school - a wholehearted YES!

I will be returning to Davies Lane School shortly (in March 2013) for 2 days further work with the same students. For at least half of each of the 2 days, each year group will be split into 3, with me and Robin  working with the most able musically. We will look at more solo/part singing and more rehearsed instrumental work. Each year group will be concentrating on 3/4 songs to perform on the evening of the 26th March (4-5pm) We will work primarily on these songs although we will try to add most of the songs if possible. The other two thirds of the year group will be working on the drama, scenery and costumes for the play (concentrating again on the 3/4 chosen songs). The afternoon session will put it all back together, concentrating on the songs for the performance, and recording all of the musical.

And I am going into another 2 schools in March to do more “instant musicals”, initially on Queen Nut (so an Egyptian theme) and Theseus and the minotaur. This is an exciting new development! Scores and backing tracks will in due course be made available from www.christophernorton.com, along with a license to make copies.
Schools in other parts of the country have also expressed interest and I will add the "mini-musicals" idea to the Events package featured at http://www.oliveland.com/nortonevent/

Posted by Christopher Norton at 7:57 PM