My initial reason for visiting Minnesota was to take part in the wedding concert of Jon Michael Iverson and Pinar Basgoze. I first met Jon in 2007 at the MTNA in Toronto and he has become a good friend since and a great proselytizer for both Connections and American Popular Piano. See www.jonmichaeliverson.com and look for the Christopher Norton Project for a start!

Once it was established that I was visiting Minneapolis, I was invited to give a talk to the Minneapolis Music Teachers’ Forum – MMTF (www.mmmtforum.org) as well as do a number of activities at the MacPhail Centre for Music (www.macphail.org) and finally to do 2 presentations at the annual Minnesota Music Teachers’ Association conference (www.mnmusicteachers.com)

I flew in from London and after a short night’s sleep was (sort of) ready to start the presentations. First up was the MMTF – this was billed as a Meet the Composer event and I gave a talk about the variety of things I’ve done over the years as a composer, including my educational music series, but also referencing media music, ringtones, choral music etc. It was a small but enthusiastic group and there were quite a few questions and comments at the end. Here are some of the teachers who attended: 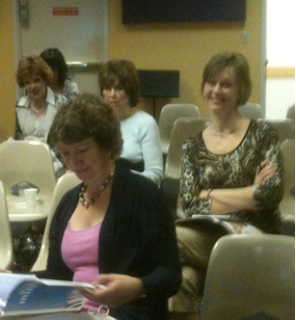 The event was very ably organized by Mary Jo Leier, pictured below. 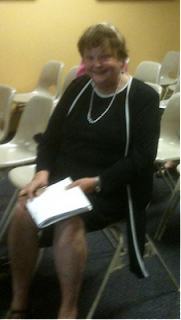 One other person who came to the presentation was Nicola Melville, a New Zealand-born pianist who is now assistant professor of music at Carleton College, Minnesota, and is on the faculty of the Chautauqua Summer Festival. She has played my Rock Preludes a lot in concert and I was meeting her to discuss whether she might be able to make new recordings of the 4 books of Preludes and the 2 Concert Collections. Here’s a picture of Nicola – check her many activities via one of links above.

I then went across to MacPhail Center for Music, which is a community music school in a very impressive purpose-built building, with a fabulous concert hall and all the pianos and technological set-up that you could possibly wish for.

I gave a talk on all my materials to a group of the piano teaching staff – the presentation encompassed Microjazz and other Boosey & Hawkes material, but also Connections and American Popular Piano. Here I am at that session: 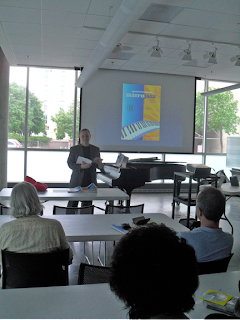 I felt there was a sophisticated appreciation from the MacPhail teaching staff of the pedagogical value of both the supplementary material (Microjazz and Connections) and the core material (American Popular Piano) being presented.

The following day was a public concert by 22 students, all playing pieces I’d written. It was preceded by a talk on what gets me started when I’m composing – I listed (and played examples of) 5 categories:

I then played short recordings of pieces by composers or bands that have been a particular influence on me – Beethoven, Nielsen, Prokofiev, The Jazz Crusaders and Steely Dan!

The student concert included some excellent performances covering a wide range of styles and difficulty levels. The stirling work of the 12 Minnesota teachers represented was very much in evidence. The venue was very striking: 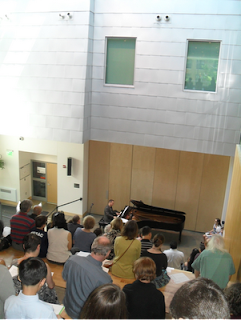 This was the first event like this at MacPhail like this – a non-competitive composer-oriented concert - and we hope it could lead to a Piano Festival event or events in the not-too-distant future.

The following day I took a kind of mass master-class, with probably 25 students playing for me. Most of them played classical pieces (Greig, Schumann, Gurlitt etc) and some played some of my pieces. I gradually got a number of piano playing fundamentals into the open, such as the importance of knowing what the fingering is of a passage, the importance of projection and the negative effects of weak fingers when playing scale passages! It was a positive session and many of the students played more than once - I called them back to play again in order to illustrate a particular point.

Later that day was the wedding concert of Jon Iverson and Pinar Basgoze. Friends and colleagues from Minnesota and further afield played in a concert celebrating their recent nuptials. There was a great variety of music played, from a Bob Dylan song accompanied by bass clarinet and mandolin to a Fantasy on Carmen for 8 players at 2 grand pianos. I played a Latin Prelude and a new piece, a multi-time signature take on Hark the herald from an uocoming Christmas book. The whole concert was live streamed on the internet and various people watched it in other parts of the world.

On the Monday and Tuesday (June 6th and 7th) I was an presenter at the MMTA and gave a talk – Unlocking Popular Styles – as well as a product session, on American Popular Piano. The first talk was well received, partly because I had lots of audience participation, creating ad hoc rock bands, Latin percussion bands and samba bands to accompany me and a teacher who was brave enough to help me out on stage from time to time. Teachers are more curious about pop and rock styles than they care to admit and anything that can sharpen their awareness of styles is only going to be helpful.

The product session was very well attended indeed and I felt that the work I have done in Minneapolis (see the archived report on my Scmitt Music presentation) and the work both Jon Iverson and Andrew Hisey (my editor on the Connections series) have done have means that people know who I am and have tried some of the series out and have told other teachers that they work.

There was quite a rush to the music dealer’s stand after the session, by which time I was on my way to the airport and back to London.

Thanks to Jill Kilzer for being willing to add me to the programme at short notice. It was great meeting many fine teachers from Minnesota and I hope to see them all again before too long!