As it states on its website (www.mtac.org) the Music Teachers' Association of California, incorporated in 1897, is a professional organization of approximately 4,500 members. Throughout its 100 year history, MTAC has dedicated its efforts towards the pursuit of excellence in music education.

Each of the more than sixty branches throughout the state - from Humboldt County to San Diego - maintains its own schedule of programs and activities and participates in state wide projects and programs.

Scott, as you can see, is taller than average…

Scott and I did a presentation on American Popular Piano at 8 am on the Sunday morning and it drew a very large audience. The workshops both Scott and I have done in California, often to small teacher groups, have really helped to make more people aware of us and the series. The presentation went very well and there was strong interest evidenced at the Novus Via stand over the following days.

One thing I would like to highlight – a number of teachers came up because they were interested in the radically different approach to the teaching of improvisation as evidenced in the APP Etudes books. I was able to work with some of these teachers, taking them through the original piece, then through Modules within the Etudes, then getting them to improvise more freely, with on-the-fly suggestions from me regarding simple but effective techniques about improvising better. The results were gratifying, to say the least, and it made me aware that teachers need to feel comfortable with improvising before they embark on teaching it themselves!

Here’s a picture of one of my newbie improvisers – a church musician who had never tried improvising in the styles found in Levels 6 -8 and who discovered she had a real flair for it. 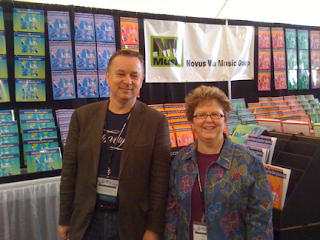 I hope to get back to California before too long – apart from Ellen Tryba Chen, whose students I worked with for 2 days prior to MTAC, there was quite a lot of interest in organising improvisation workshops for teachers and students in California. Watch this space!

Posted by Christopher Norton at 3:32 PM