I’ve been to London, Ontario a number of times now – way back in the late 80s (I think!) with Boosey & Hawkes and Roland Canada, more recently on the Connections tour, then with Scott McBride Smith on the APP trail and, most recently, with Victoria Warwick, the Executive Director of Conservatory Canada on a CC tour. Conservatory Canada (www.conservatorycanada.ca) is, to quote its own mission statement, “a not-for-profit, federally incorporated educational institution of professional musicians and volunteers that serves its clients through programs of study, training, examination, recognition and performance” CC hosted this event, which consisted of a 2-hour teacher workshop on improvisation, 4 master class sessions and, as with the other places, an evening Gala concert. We used the Wolf Performance Hall in the city centre, so we were working in a great purpose-built concert venue

The improvisation workshop was a lot of fun (I thought so anyway!) I used Intercity Stomp from Microjazz, then London Waltz and The Girl on the Beach from APP Prep and Level 1 and finally Bayou Tapestry from APP Level 7. I got one of the teachers to play Intercity Stomp as written first, so that the harmonic framework and melodic ideas were there as a clear starting-point. We then did simple tapped improvised rhythms, with the strong on-beat quarter note Gs supplying the beat. Then we tried improvising using the notes of the piece (F, G, Bb, C, D) as source material, with simple ideas supplied by me to help my “student” get started. Finally I and my plucky student played the original piece up to a certain point, then she did an improvisation over the thumping Gs (she loved doing it, honest!) and then we repeated the piece right to the end. To great acclaim. 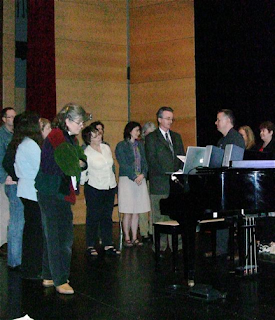 The early APP pieces used the Etudes books from the respective Levels and my methodology became clear quite quickly:

The improv (as we like to call it) uses a set rhythm and given notes, but which of the notes are played when is down to the student. As always, unexpected magic happens at this point.

The group were intrigued by the Level 7 APP Etudes book – chord symbols are beginning to appear, chords (generally in inversion) are highlighted and analysed. The left hand plays the entire chord progression with the backing track, the right hand is then given some improv tips, including the scale(s) or mode(s) to use, the hands are put together and hey presto! something wonderful happens again. 2 examiners for the CC Contemporary Idioms syllabus took part and they seemed to like the approach very much indeed.

The master classes were very different from the previous venues in the sense that one London teacher fielded a number of students who were playing “advanced” classical repertoire – including a Mozart sonata movement, a piece by Kuhlau, Chopin’s Revolutionary Etude and a Liszt Transcendental Etude! I tried not to demonstrate too much of the last pieces mentioned, but it was interesting for the audience to hear much more challenging pieces being attempted by teenage students. I felt sorry for the young student who had to follow a Liszt Transcendental Etude with the 10th performance of the day of “Stairway”!

The evening Gala was once again a special time for the performers and the improvement in playing during the course of the day was quite noticeable, the Revolutionary Etude as much as Struttin’. Parents and students were impressed by the range and quality of the playing - it really was a very positive occasion. 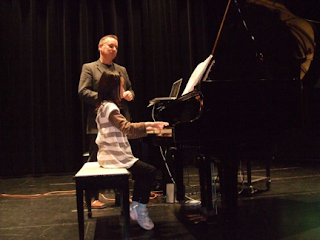 Posted by Christopher Norton at 9:19 PM